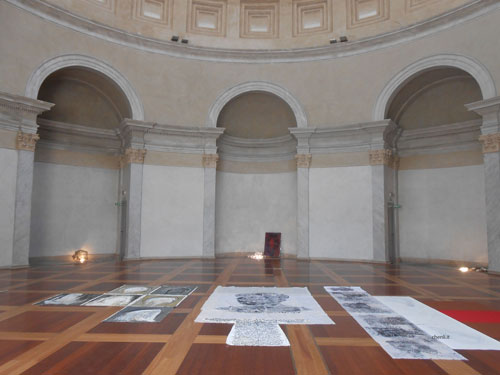 
ROOTS. ORIGINS, TIME, SPACE AND THEIR SHAPES.
One of the most curious in the city of Turin may be the Mausoleum of Bela Rosin and its park. Located in the district of Mirafiori Sud, in the south part of the city, this building is an exact copy, in reduced scale, of the most imposing and known Pantheon in Rome. 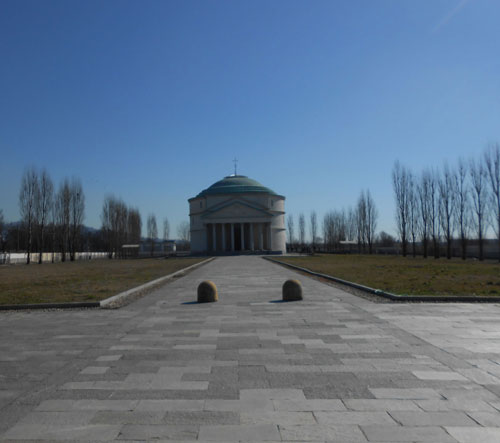 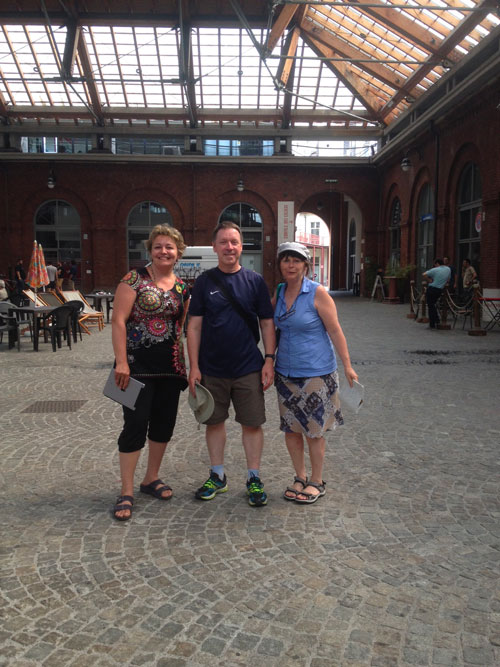 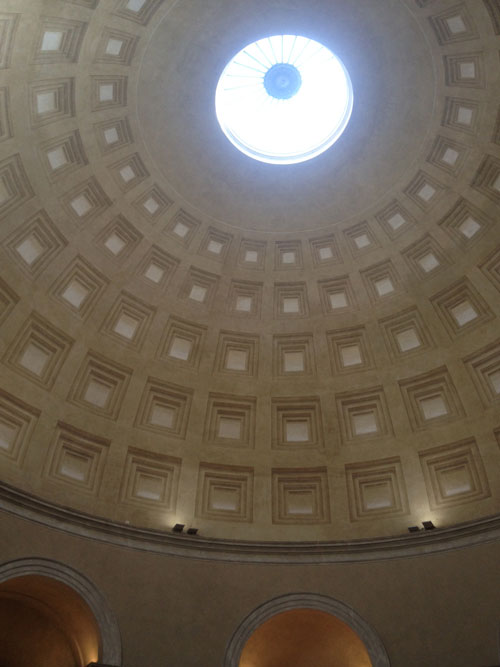 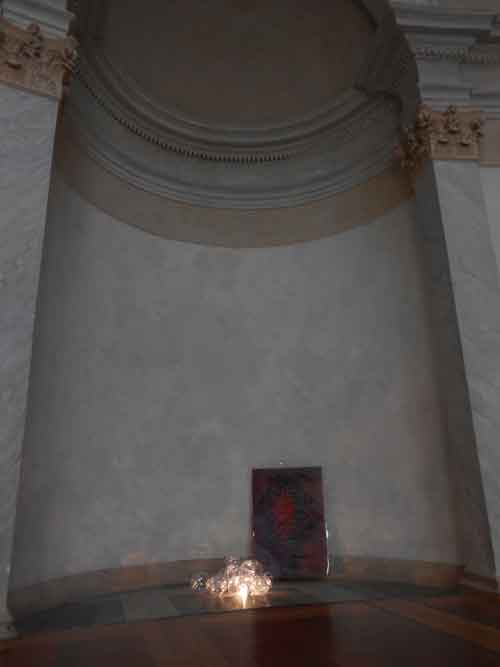 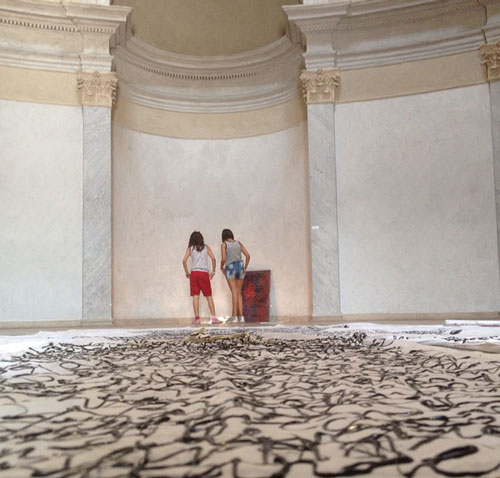 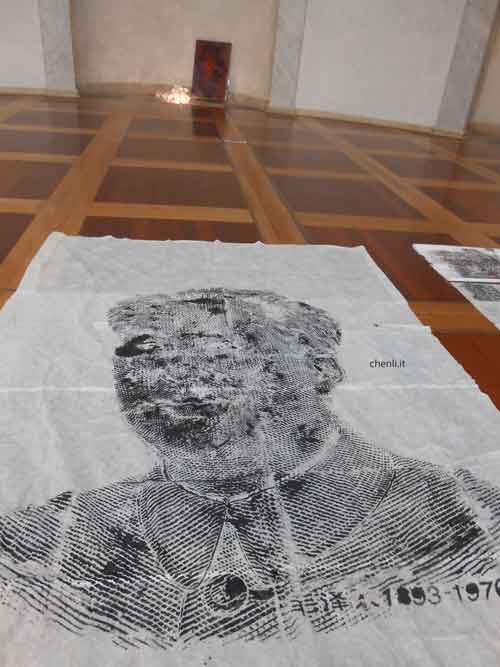 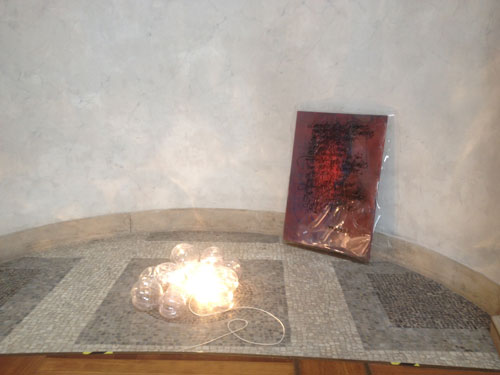 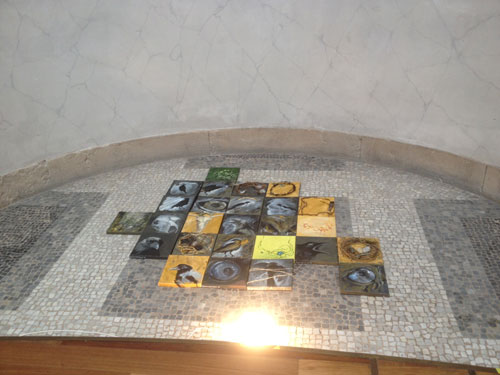 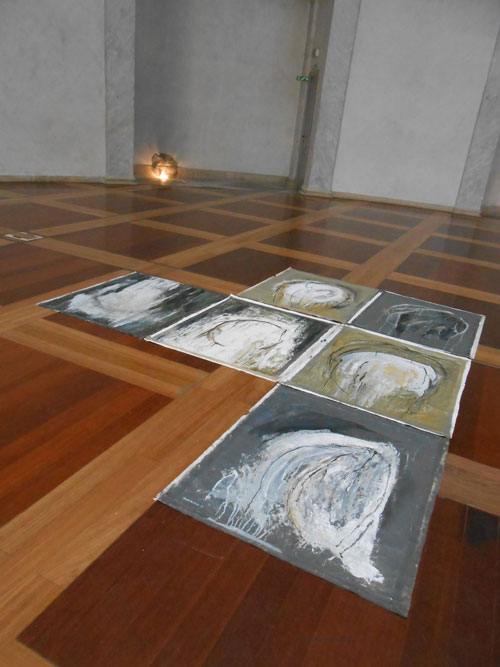 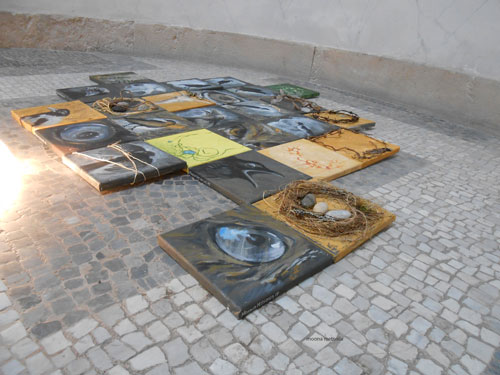 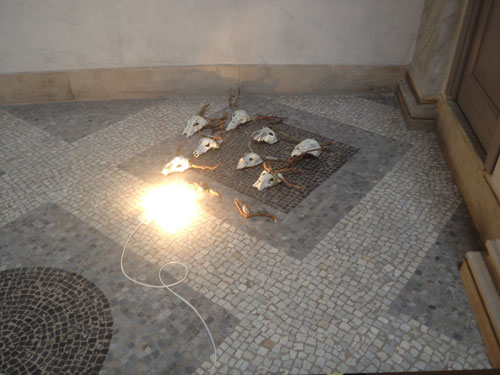 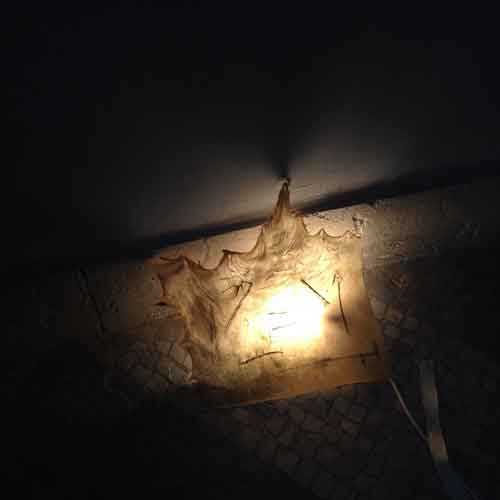 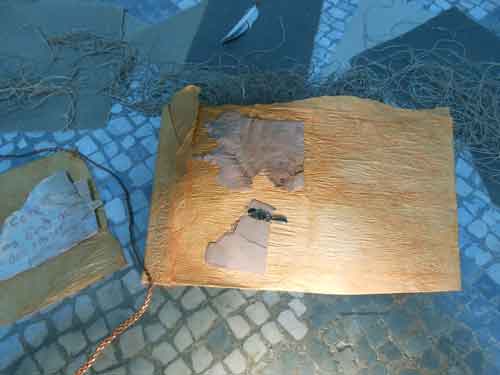 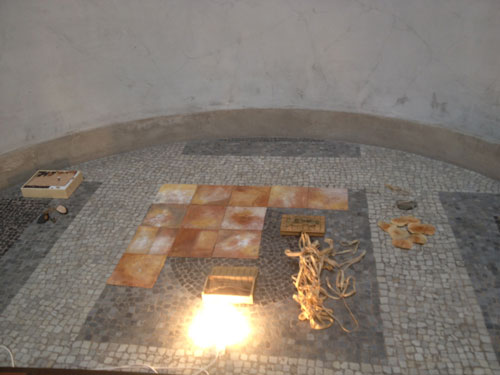 The most interesting work created together by the three artists is this artist's book, which collects three years of correspondence thoughts, talks and e-mail between Moona, Guylen and Chen Li on some salient points of reflection on the roots and their importance for the future. Chen Li is the art director and designer of this book.
Available on request, the 64 pages catalogue-artist's book made by the three artists. In english. 20 euros + delivery charges 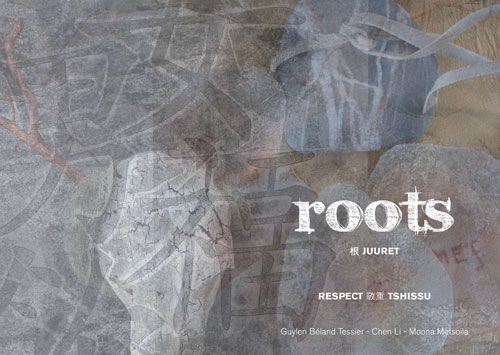 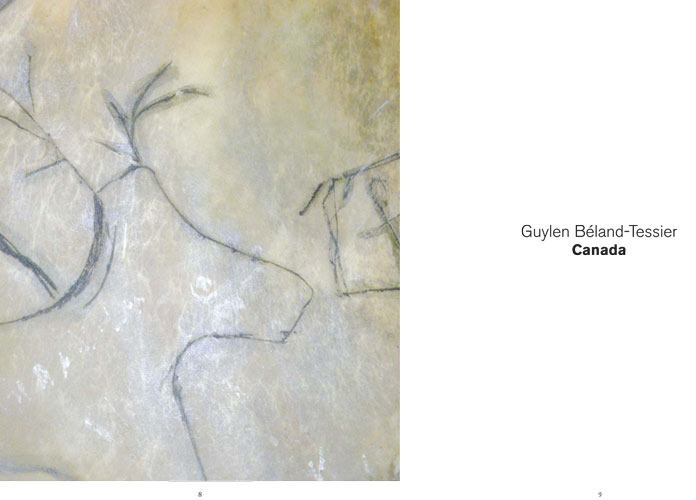 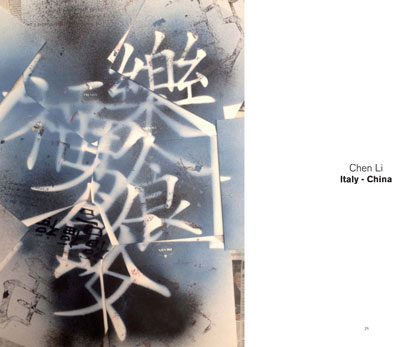 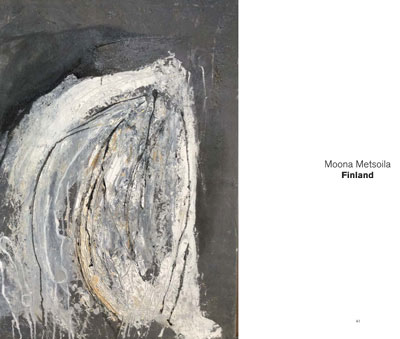 The conference about roots, the performance by Guylen Béland Tessier and Alma Teatro 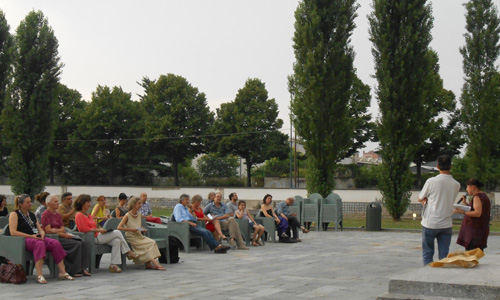 Thanks to Davide Demichelis, tv host of "Radici" (roots), Rai 3, host of the opening day dedicated to "Roots", to Gabriella Bordin and Alma Teatro group, to Luisa Gnavi for the reading, to Carlo Gloria, artist. 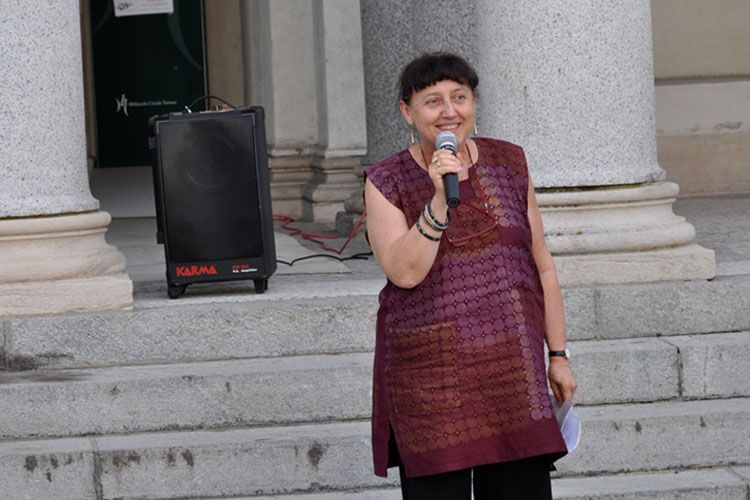 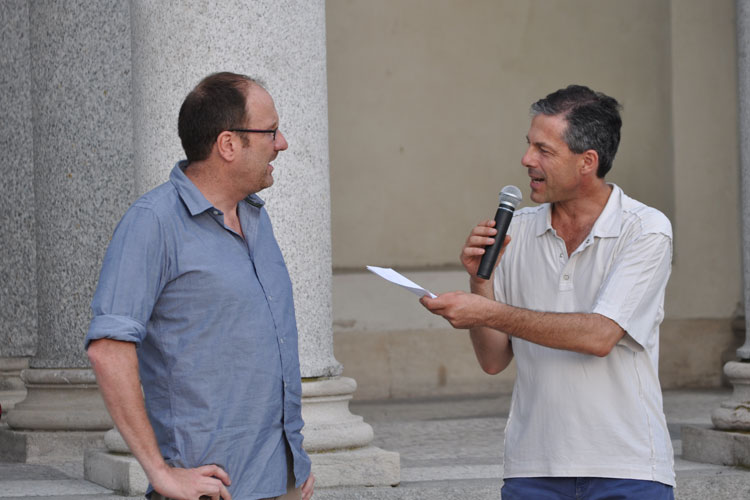 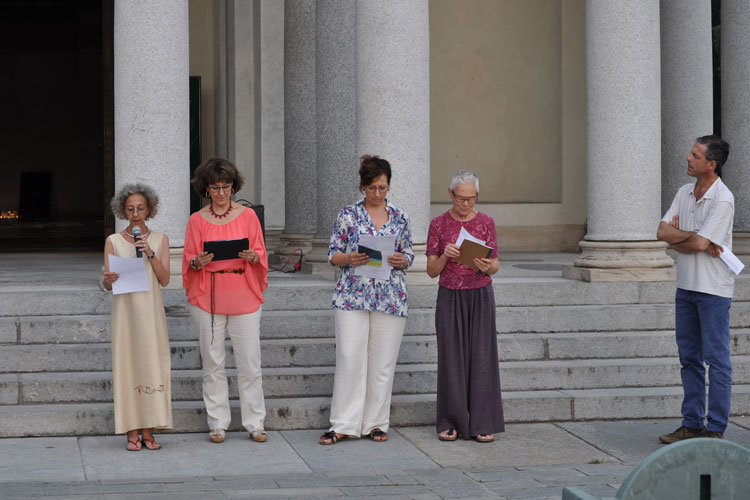 ROOTS. The origins, time, space and their forms.

A female look three times wide, three times intense and three times deep; precisely because interpreted by three women through their eyes and their hands. An artistic project that takes shape uniting three continents and three artists, who discuss the “origins” and the common threads that start from them and unravel, giving life to a network of paths able to cross this globalized world, now, at least apparently, reduced to a market and united by the wave of technology and communication. The encounter of three women who discuss the “roots”, ours, their own and the poetic, mythological and spiritual origins of our human condition in the world. Guylen Béland Tessier (Canadian), Chen Li (Chinese), Moona Metsoila (Finnish) are in fact three artists from different generations and backgrounds who, facing a world of increasing unifi cation, feel questioned by their own "roots", by those symbolic, spatial and temporal dimensions that somehow present themselves as origin and destiny of individuals, peoples and cultures in this social-historic moment of major transformations, migrations, fears, hopes and wishes. Born from a mail correspondence, this artistic project takes shape fi nding in the metaphor and materiality of the “roots”, the opportunity to deal with the excess of sense and meaning that our society removes, in the effort of replacing it with the homogeneity of codes, languages and materials. We are looking at the courageous effort of fi nding a reason though art to a currently commonly human issue: what to make of that spiritual and material heritage that our history and origins presents us at the threshold of the new millennium. The urgency felt about this issue from a female point of view it’s not accidental, ever conscious of the fact that every heritage carries different forms of responsibility and that this triple feminine look is interpreted in an activity that creates material and symbolic nature. Is indeed art and the different poetics of our trio that take on the task of presenting the relationship with earth, nature, cultural diversity and different narrations that they bring along as heritage of their cultural, social and geographical origins. We are therefore assisting to an artistic experiment that displays a polyphonic show of experimentation of materials and languages of art able to highlight resonances, evocations of elements that are common to a wider human culture. Stories of shamans and Amerindian cultures of Canada act as counterpart to Finnish epic poetry of Kalevala and to the typically Chinese tradition of signs and writing, choosing organic materials as stone, leather or inorganic as plexi for the creation of the works. Paintings and objects by Moona Metsoila, heir of the culture of songs from Europe’s Great North, enter a conversational relationship with Guylen Béland Tessier’s shamanic designs in order to stimulate a refl ection on signs and writing while meeting Chen Li’s activity of “contemporary calligrapher”. All without falling into the affectation of an opportunistic and stereotyped recovery of the typical elements of their own particular cultures. We are not faced, in fact, with an opportunistic and commercial use of traditional symbols and materials but with a experimentation of cultural and cultural and symbolic grammars of faraway lands that meet in the world of today to discuss their origin and their destiny. We are looking at an artistic operation that excludes the Kitch, taking on the responsibility of reinterpreting a spatial and temporal diversity in a contemporary context, giving life to sophisticated and delicate works capable of speaking to the emotions and rationality of our daily globalization. Art has always had the role of giving shape to material and symbolic objects that must fi nd their place in space and time in order to question the past, present and the future. These three artists perfectly succeed in presenting a responsible contemporaneity, in charge of its cultural heritage for the shaping of artworks of spiritual and poetic value, because able to connect with the deepest elements of our cultures and individuality.

"CHEN LI STUDIO is now in a new office: via Principe Tommaso 26a, Torino. You can request our services also via e-mail, as usual."